“If men dislike Clinton more [than other Democrats], it’s partly sexist,” says Featherstone. “If you hate Hillary because she reminds you of your ex-wife, that is sexist. If you dislike Hillary because she has dedicated her life to the neoliberal polices that have screwed you, as a working person, that’s not sexist.”

Decoder ring: “shrill“, “opportunistic“, and “because cankles” are also sexist. 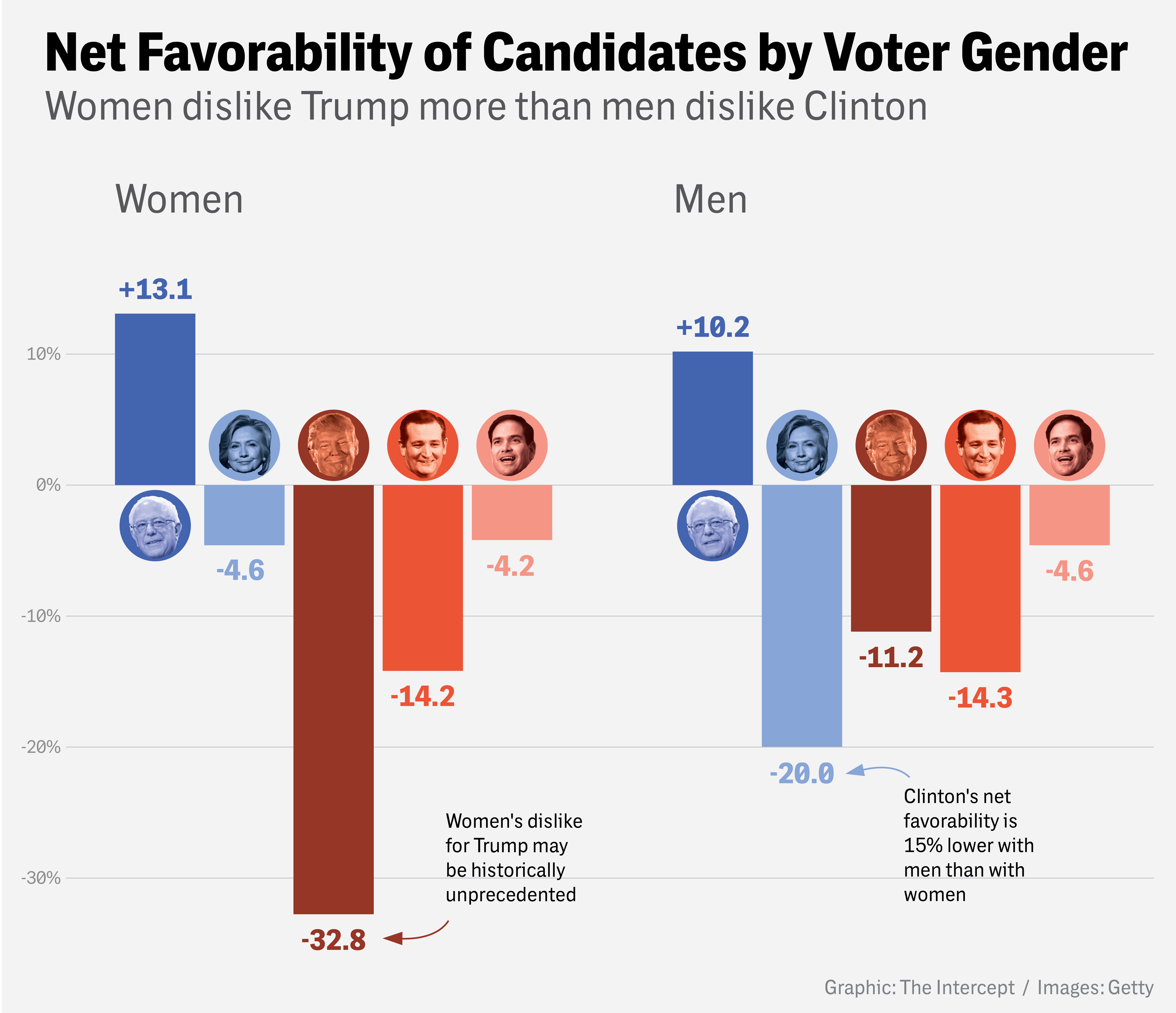 Women dislike Trump at what appears to be an unprecedented level for a national politician.

That’s the other side of this, the gender one. The errands being served up by the on-demand economy — cooking, cleaning, laundry, groceries, runs to the post office — all were all once, and in many places still are, the jobs of stay-at-home mothers. Even now, when women outnumber men in the formal workplace, they continue to bear the brunt of that invisible domestic work, often for many, many hours a week. So women — those who can afford it, at least — have the most to win from passing that load on to somebody else.

via The Shut-In Economy.

For years, Hobby Lobby has been funding a radical fundamentalist ministry which up until very recently was run by a hell-bound pastor accused by more than 30 women of sexual harassment and molestation. One of his victims of his sexual advances was 17 years old. The curriculum at their “training institutes” includes a heavy dose of sexism, theocratic chauvinism and outright misogyny, and the importance of obedience to the whims of “Godly men” like himself that tell a life-long victim of sexual assault that she was an irresistible temptress from the age of 8.

Massive grats on raising the number of abortions performed in the United States, #HobbyLobby1.

“A new study by investigators at Washington University reports that providing birth control to women at no cost substantially reduces unplanned pregnancies and cuts abortion rates by a range of 62 to 78 percent compared to the national rate.”
WUSTL: Access to Free Birth Control Reduces Abortion Rates

Seeing the Supreme Court acknowledge that the “religious beliefs” of a corporation are completely irrelevant when it comes to blood transfusions, or any number of other medical treatments that are also none of their business makes this decision even more disgusting. It would be one thing if their ignorance of medicine was consistent — it would still be wrong and idiotic, but at least then it would just be the garden-variety stupid we’ve come to expect.

Radical conservatives and Hobby Lobby would never settle for garden-variety stupid — their moral compass, magnetized by misogyny, guides them through the wilderness of equality for all Americans towards bullying in the form of institutionalized slut-shaming.

It isn’t all bad news though; the more galvanized and defined their prejudices are, the easier it becomes to dismantle and dispose of these temporary obstacles to equality, dignity, and liberty. These attempts to find some solid footing on their moral high ground is especially difficult for them because they’re thrashing in quicksand. While it looks like they may have been handed a rope; it’s just enough to give an equally gruesome alternative to drowning.

It’s important to have a choice.

I don’t even know who “Uncle Sugar” is, but it sounds like the sort of vaguely racist, folksy, down-home dirt-farmer bullshit that Mike Huckabee is known for.

The U.S. ranks at number six for “economic participation and opportunity” and ties for the top slot with many other countries for educational attainment, but it falls at 33 for “health and survival” and 60 for political empowerment. The country made a slight gain in women’s representation in Congress this year and there were also small gains in women’s labor force participation rate and the gender wage gap. The report notes, “The United States has fully closed its gender gap in education and health.”
World Economic Forum Global Gender Gap Report: 2013

Easily one of the best articles I have ever read on the subject of harassment and abuse online.

Twitter threats are just one example of online harassment. In July The Washington Post published a story about men who post phony ads to make it appear as if their ex-wives or girlfriends are soliciting sex. One man, Michael Johnson II of Hyattsville, Maryland, published an ad titled “Rape Me and My Daughters” and included his ex-wife’s home address. More than 50 men showed up to the victim’s house.

“Ultimately, all these actions would be treating the symptoms and not the cause,” Criado-Perez told the audience. “Social media doesn’t cause misogyny; the police can’t cure it. What we really need to do is sit down as a society and take a long hard look at ourselves, in order to answer the question: “Why are we producing so many people who just seem to hate women?”

— Greg Sandoval for The Verge

Is there not one man here brave enough to see, how my untouched thighs burn the trousers off me?

In Afghan culture, poetry is revered, particularly the high literary forms that derive from Persian or Arabic. But the poem above is a folk couplet — a landay — an oral and often anonymous scrap of song created by and for mostly illiterate people: the more than twenty million Pashtun women who span the border between Afghanistan and Pakistan. Traditionally, landays are sung aloud, often to the beat of a hand drum, which, along with other kinds of music, was banned by the Taliban from 1996 to 2001, and in some places, still is.

Beautiful and provocative, even in translation.